Exploits while working in Lyon, and beyond…

Excuse the excessively cheesy title but it really is the theme of this post (look at me, not only knocking out another post in a timely manner, but managing to work in a theme??)

September is always the time of new beginnings in the northern hemisphere, especially for teachers, but it was an extra big one for me this year. Back from my jetsetting at the end of August, it was first and foremost time to actually settle into my new flat properly and spend some time with my new flatmates! I am the baby of the flat at a sprightly 26; the others are all in the process of ageing from 28 to 29: Raphaël, architect-engineer (it’s a thing in France), Elodie, freelance graphic designer, and Adrián, data engineer. All very cool characters with a wide array of interests. The flat itself could do with a little TLC, but it’s big, and most importantly, very centrally located. After a few years all over the outskirts of Lyon I am now officially back in the city (near Place Guichard for those in the know), and I can walk just about everywhere. That combined with the company makes the steep rent and sub-par property managers just about worth it…

Raph’s birthday is a week after mine in October, so regular readers of the blog may be able to guess what that means…time for another crémaversaire as joint birthday bash met belated flatwarming, as is tradition. This time though it had the added garnish of 3kg of carrot cake lovingly prepared by Raph at 1am the night before. It was so nice to be entertaining again, and it was one of the first times all four of us had really been a unit, let alone meeting each other’s friends. No complaints from neighbours + an inspired pictorial guide to sorting rubbish on my part = great success! 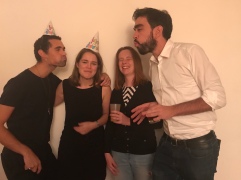 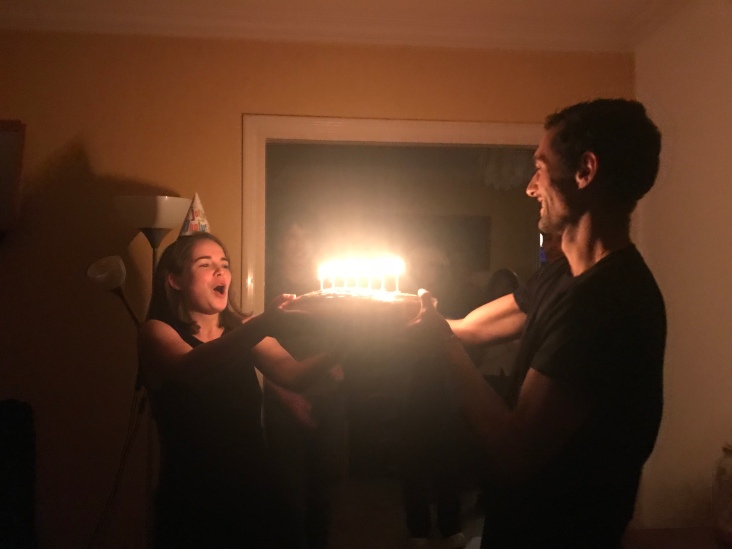 No sooner was that getting underway than I also started my new job! Et oui, it’s at last time for the details I have been ‘teasing’ for a few months (as if anyone has been holding out to know via the medium of this blog). Back in May while I was in the process of sending unsolicited CVs off left right and centre, I got an unsolicited message myself in my LinkedIn inbox, that long story short turned into a job. Who knew LinkedIn was actually useful! I’m working for a new English school (for adults) that opened in Lyon over the summer, having been already well established with around 27 schools all over Italy. We are six staff and now about 120 students all up, and as cheesy as it sounds it is really like a family. Our classes have 7 students max (usually fewer), we see each student twice a week on average, and have lots of events to really foster the community. And it works! It’s been wonderful to see relationships build amongst the students, in addition to their linguistic progress. The latter is the most evident with our total beginners of course, but I have students at all levels from beginner to C1, which definitely keeps things interesting. 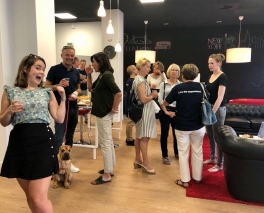 My most creative endeavour yet 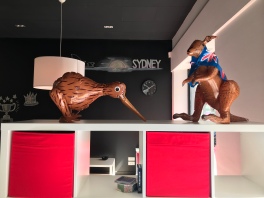 On top of that, I am staying on one class a week with the engineering students, mostly to keep a link going with my former workplace, but also because I enjoy working with these high-level students (long story short: working in the public education sector is v complicated, and basically impossible to get another full time contract, slightly less impossible to get hours as a fill-in teacher. Hence sort-of-still-being-there-but-not-really). This is quite different to my main job in terms of what I have to prepare/deliver/teach for each, so I am enjoying having the different challenges. One isn’t necessarily better than the other, they’re just different. As I said to one colleague, I feel like previously I was always concentrating on WHAT I was going to do with the students – what theme, what resources, what kind of task etc. And didn’t think so much about how I would deliver this or how they would best learn. Whereas for the new job I don’t prepare any of the materials, and instead the focus is a lot more on how that content is transferred to the students. So from the beginning I’ve been a lot more reflective about my practice and changing things up, hopefully for the better! There’s always so much to think about that obviously one can’t be all over everything at once but I do feel like I am making good progress.

Meanwhile, I also started a new gig for a school working with students in médiation culturelle, that is, professionals who put the public in contact with art and culture. They could be museum guides, music educators, festival organisers, comms/promo workers, anything of that ilk. This is one of the places I had sent my CV, and while they couldn’t offer me any hours, it actually worked out perfectly to take on as a side project for interest’s sake. I basically have carte blanche to do whatever I want, as they have so few hours of English; the brief is to focus on art/cultural topics and class outside the classroom is encouraged. It hasn’t been without its challenges but overall it’s going really well, and I’m definitely enjoying having a bit more personal experience/interest to bring to the table, after two years working with engineers.

Aside from all that work, it’s also been ~new beginnings~ on the extracurriculars front. Once they got sorted in late September I really felt like things were sorted and I could settle into a new routine. First and foremost – I’ve joined a new choir that I’m absolutely loving! After two years with the staff choir at my former workplace, the second of which fell a bit flat, it was time to look for something more fulfilling. I trawled through good ol’ google and luckily everything has worked out really well with the one I chose! It was a bit hit and miss at the beginning as there were just too many new people (and too many women compared to men) so they reluctantly did auditions a few weeks in, even though it’s against their ethos – the goal is to have fun and be inclusive, with commitment being the most important factor. Nonetheless, I survived, and am slowly but surely getting to know everyone better, partly thanks to our first night out together last week – there’s about 40 of us total. I wanted something a bit more challenging, and I’ve got it; we’re averaging about one new song per week. Things move fast, and there’s a fair amount of implication at home required to keep on top of things. But that’s exactly what I was after – equally motivated and driven choir-mates who all pull their weight for a result that is totally worth it and such a pleasure to be a part of.

The final piece of my ‘getting things back on track’ puzzle was at last joining a new gym at the end of September. This was well, well overdue, with three months sans sport (and a lot of greasy Spanish food) over the summer. The intention had definitely been there earlier, just not the logistics while I was sorting out everything else detailed in this post. Better late than never though, I’m well and truly back into the swing of things with three sessions per week, despite my tricky work timetable that changes every day. I’ve even managed to try out a few classes and – get this – am enjoying them??? New beginnings indeed.

I would be remiss not to mention at long last la visite of my high school French partner in crime Catherine. Reunited in Francophone territory for the first time since one fateful school trip to New Caledoniain 2008. Ten years ago! Her visit in September was short and sweet, with a cracker of a weekend to get out and about and see the best of what the city had to offer. We even went for alfresco brunch with flamate Raph and his friends, in which we set up camp at the riverside bar for drinks and took turns venturing into the market for food. Our pre-midday litre of sangria raised a few eyebrows (and was rather potent) but YOLO – you’re only in Lyon once! 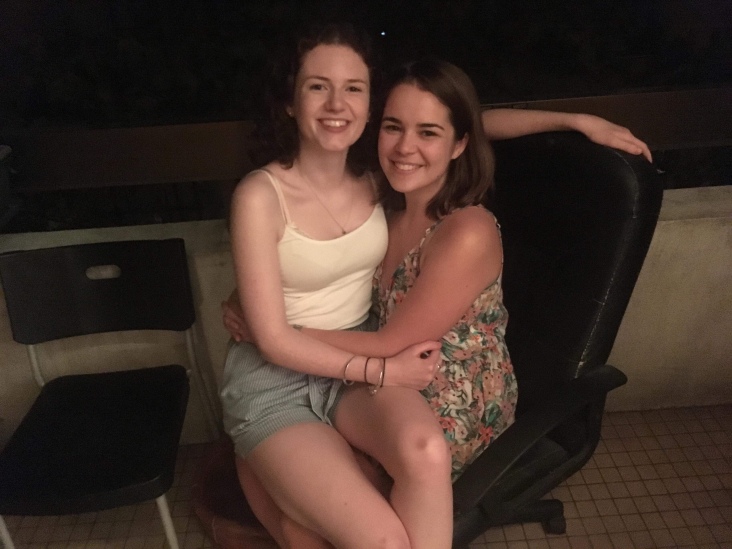 For the first time in my life I have been roped in (even somewhat enthusiastically) to a book club. The working title of ‘book n booze’ may go some way to explaining that. the idea was floated by some ex-colleagues back in June, and I didn’t think it would really get off the ground. Thanks to one highly motivated team member, a book was chosen, and I thought the least I could do was play along and read it over summer. Well, not only did we actually meet up to discuss it (in a bar…with good food and wine…and a lot of post-summer catching up to do), but we have actually committed to a second book and a much shorter window of about two months before our next meeting! The goal: have 100% of the group actually finish the book this time…I think I am trailing in last place so far, but now that I’ve knocked off this blog it will be #1 work-avoiding priority. Let’s call it strategic planning, as the last time I could barely remember what I’d read back in August by the time we met at the end of October. That book was The Inheritance of Loss by Kiran Desai, which I don’t think any of us really LOVED, but it did make for some interesting discussion. Next up is The Brief Wondrous Life of Oscar Wao by Junot Diaz. No idea what I’m going to pick for my imminent turn; if anyone has any recs please let me know!

Totally unrelated to anything else but nonetheless worthy of being immortalised in print…I dismantled and declogged the kitchen sink. Something which I was NOT prepared for at my private girls’ school. I think I surprised everyone (myself included) when I actually went through with things. A couple of youtube tutorials was all I needed to get revved up, and I was actually disappointed to find ‘just’ a rather large stick in there that was the culprit. I’m saving the bathroom sink for a special occasion, watch this space…

And with that I am legitimately up to date for the first time in what seems like FOREVER, but looking back on my blog it seems like I was doing pretty well up till February. I suspect that the next post will come around the same time, after some good #content is generated over the end of year period, but as ever dear reader I shall leave you in great suspense!

Thanks as always for reading, and bravo if you’ve stuck with things for this long.